After leaving the Bats Hotel I entered the edges of the Pirin National park taking me along mountain climbs that wound their way up into a day of heavy rain. It was cold and I was glad of this break from the weeks of searing heat. I do not think that I would have been able to climb the day's 7000 feet if the had sun beat down as it did in Germany.

By late afternoon I began to descend the first range of hills. Fast, hair-pinned treacherously wet the roads led into the town of Goce Delcev. With the temperature at 8 degrees the icy rain egged on with the self inflicted thirty mile an hour decent soaked deep into my clothes and bones. I shook uncontrollably as I cycled empty streets. Streets so dark from the mountain rain that passing trucks were able to light up the potholes that their wheels would empty of water as they passed.

I found a petrol station, Luk Oil. Fell through the aluminium framed door and dripped all over the floor as I felt a balst of warm air hit my shaking body. I changed clothes and drank warm drinks and ate bags of crisps and sweets before even thinking about setting off again into the evening and thankfully drier weather.

An hour into the evening's ride, my phone died. The rain had been too much for it and it would appear from the wisps of smoke that its choice of exiting this mortal coil was cremation.

No photos, no map, no diary and a worry that loved ones following my GPS dot would expect the worse.

I continued back up into the mountains past slate and stone quarries. These family affairs sold their neatly palletted loads at the roadside where small gangs of men would cut and shape stone for wholesalers and public.

As the late evening arrived I passed through the town of Dolno Drjanovo, with a hillside mosque. I asked a couple if I could borrow their phone. With no contacts and forgotten social media passwords I was forced to leave messages on works' answer phones.

I stayed the night at one of the slate yards. Most of them on the climb into the mountains had stray dogs on guard, but the site I chose was without watch and as more rain fell I cooked in the dark between piles of neatly stacked slate, in the mountains, with pine trees for company.

It felt good to have no device.

Up and off early into heavy rain by seven I was soaked and frozen through again. Factory lights lit up the small mountain towns against a grey morning light. I stopped at a cafe to dry off and warm up. This was heavy mountain rain, lots of it and the coffees and omelette came to £3 bringing warm relief and the use of the owner's phone to write emails to half remembered addresses warranted a big thank-you before I set off again.

By midday there was respite and I began to take pictures again with my Go Pro. For some reason most of the pictures came out ghosted, I wasn't too sure why. A couple of months later after reading the instructions, I deselected HDR. A feature designed to give you shit photos.

And it rained a lot. Pretty much most of the day.

A break in the weather
{"items":["5f901c_3b573e1abcc44bfaba965c1da84dae29~mv2_d_4000_3000_s_4_2.jpg","5f901c_7618f48f72474f269dd568f72aac5a3b~mv2_d_4000_3000_s_4_2.jpg","5f901c_49fbb96665a641728560e20a8a93264c~mv2_d_4000_3000_s_4_2.jpg"],"styles":{"galleryType":"Columns","groupSize":1,"showArrows":false,"cubeImages":true,"cubeType":"fill","cubeRatio":1,"isVertical":true,"gallerySize":300,"collageAmount":0,"collageDensity":0,"groupTypes":"1","oneRow":false,"imageMargin":10,"galleryMargin":0,"floatingImages":0,"chooseBestGroup":true,"smartCrop":false,"hasThumbnails":false,"enableScroll":true,"isGrid":true,"isSlider":false,"isColumns":false,"isSlideshow":false,"cropOnlyFill":false,"fixedColumns":3,"enableInfiniteScroll":true,"isRTL":false,"minItemSize":50,"rotatingGroupTypes":"","rotatingCubeRatio":"","gallerySliderImageRatio":1.7777777777777777,"numberOfImagesPerRow":3,"numberOfImagesPerCol":1,"groupsPerStrip":0,"borderRadius":0,"boxShadow":0,"gridStyle":1,"mobilePanorama":false,"placeGroupsLtr":false,"viewMode":"preview","thumbnailSpacings":0,"galleryThumbnailsAlignment":"bottom","isMasonry":false,"isAutoSlideshow":false,"slideshowLoop":false,"autoSlideshowInterval":4,"useCustomButton":false,"bottomInfoHeight":0,"titlePlacement":"SHOW_ON_HOVER","galleryHorizontalAlign":"center","galleryTextAlign":"center","galleryVerticalAlign":"center","scrollSnap":false,"itemClick":"link","fullscreen":false,"allowSocial":false,"allowDownload":false,"allowTitle":true,"allowDescription":false,"loveButton":false,"loveCounter":false,"videoPlay":"onClick","scrollAnimation":"NO_EFFECT","scrollDirection":0,"overlayAnimation":"NO_EFFECT","arrowsPosition":0,"arrowsSize":23,"watermarkOpacity":40,"watermarkSize":40,"useWatermark":true,"watermarkDock":{"top":"auto","left":"auto","right":0,"bottom":0,"transform":"translate3d(0,0,0)"},"loadMoreAmount":"all","defaultShowInfoExpand":1,"allowTitleExpand":true,"allowDescriptionExpand":true,"allowLinkExpand":true,"expandInfoPosition":0,"allowFullscreenExpand":true,"fullscreenLoop":false,"galleryAlignExpand":"left","addToCartBorderWidth":1,"addToCartButtonText":"","slideshowInfoSize":200,"playButtonForAutoSlideShow":false,"allowSlideshowCounter":false,"hoveringBehaviour":"APPEARS","thumbnailSize":120,"magicLayoutSeed":1,"imageHoverAnimation":"NO_EFFECT","calculateTextBoxHeightMode":"AUTOMATIC","calculateTextBoxWidthMode":"PERCENT","textBoxHeight":0,"textBoxWidth":200,"textBoxWidthPercent":50,"textImageSpace":10,"textBoxBorderRadius":0,"textBoxBorderWidth":0,"textsVerticalPadding":0,"textsHorizontalPadding":0,"titleDescriptionSpace":6,"customButtonText":"","customButtonBorderWidth":1,"customButtonBorderRadius":0,"loadMoreButtonText":"","loadMoreButtonBorderWidth":1,"loadMoreButtonBorderRadius":0,"imageInfoType":"NO_BACKGROUND","itemBorderWidth":0,"itemBorderRadius":0,"itemEnableShadow":false,"itemShadowBlur":20,"itemShadowDirection":135,"itemShadowSize":10,"imageLoadingMode":"BLUR","expandAnimation":"NO_EFFECT","imageQuality":90,"usmToggle":false,"usm_a":0,"usm_r":0,"usm_t":0,"videoSound":false,"videoSpeed":"1","videoLoop":true,"galleryLayout":2,"gallerySizeType":"px","gallerySizePx":300,"allowHover":true,"mobileSwipeAnimation":"NO_EFFECT","gotStyleParams":true,"showVideoPlayButton":true,"modifiedGallerySize":true,"selectedLayout":"2|bottom|1|fill|true|0|true","layoutsVersion":2,"selectedLayoutV2":2,"isSlideshowFont":false,"externalInfoHeight":0,"externalInfoWidth":0},"container":{"galleryWidth":2580,"galleryHeight":1440,"scrollBase":0,"height":null,"width":null}}

The mountain range was called the Rhodopes and I passed through Nastan with high cliffs that dwarfed the road and then onto Shirola Laka. It had a pilgrimage vibe and restaurants and bustle. It was like a village in the Lake District and it seemed as if tourists were attracted to the area. A range rover with GB plates came towards me and I frantically waved. I waved some more as it passed by. The driver stopped and I here I met Ben. Wearing a Barbour and flat cap I had to do a double take to make sure that I wasn't in the Lake District. Ben had left the UK in a fit of despondency and was looking at property development in the area. He told me how cheaply he lived here and how he could buy a mountain retreat for a fiver and sell it to a mate in England for £100,000. I wasn't really interested, I only wanted to use his phone, even though I was so tempted by his tales about this part of Bulgaria. I still hadn't heard from those anxious loved ones. Ben was a good guy and let me borrow his phone. I told him that if it stopped pissing down by the time I found a hotel that I would buy one of his exclusive properties.

At the time of writing I can confirm that I have no property in Bulgaria.

Derelict ski resort hotels suggested that the mountains that I was climbing through hadn't captured the hearts and minds of the industry.

That evening brought more rain, altitude and cold. I stopped at a pooh and rat infested roadside shelter and decided that it wasn't the place for me to stop for the evening and I headed down into the next valley and the town of Smolyan where a cheap room and evening meal warmed me through.

Smolyan 🇧🇬 to the edge of town, 6 miles

Mrs F started the day with a flat, she didn't want to go out into the storm. She had a reputation to think about. After fixing her in the porch or the hotel, I went for breakfast.

The breakfast was good and the rain outside intensified. By nine I was soaked through again and my garmin, jealous of my phone, thought that it would be a good idea to die.

It was really silly weather and the road showed diversion signs saying that the pass to Madan was closed. The diversion was huge. I turned around and asked a forlorn bunch at a bus stop if I could get my bike through the blocked road. One girl spoke English, but didn't know. She translated for the group and many of them just shook their heads. Damn.

I was just about to set off, when I asked again, except this time I used louder English. The girl translated again, in the same tone, they all shook their heads, smiling. Bless my waterlogged shoes and freezing fingers, this was country that had the backward head nodding and shaking thing. The road was passable by bicycle.

I cycled on and passed the landslide and continued up into the hills to Madan, the next town.

A bit later after a dry out at a garage, where the lady insisted that I leave the door open to let the cold air make me shiver some more for her amusement,my garmin came back to life.

The day picked up to and gave me a little respite in the afternoon to dry out my kit.

At the end of the day I passed through Momchilgrad. It was a dive of a town, a small taste of how poor a town can be I escaped into the hills, more climbs at the end ot the day and was rewarded with a mountain camp spot will purple hill sunsets and bleating sheep. 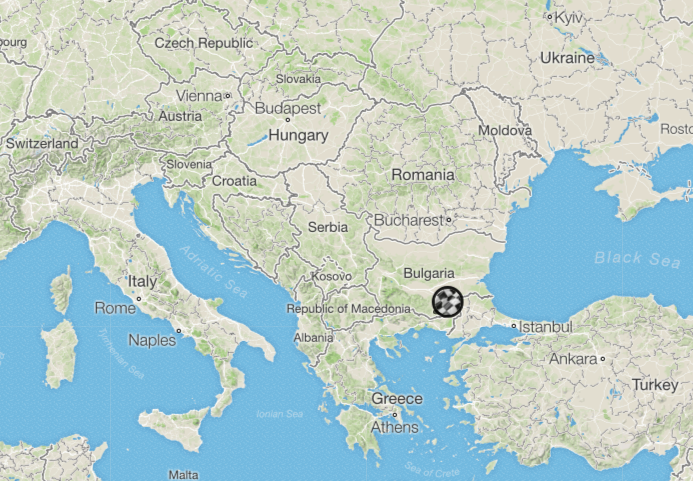 The following is the transcript of the recording I made into the gopro as my diary was wiped out after the iphone broke......

This morning it was just absolutly fantastic. The views and cool air, I was just so lucky, beautiful cycling down into the town of Krumovgrad. I had porridge when I woke up and had some more breakfast when I got into the town. There was a market and I just watched the people. I bought some supplies for the day, leaving the town these kids attacked me with catapults and chased me and stuff and then up into the hills. It was cool and at around eleven it started to brighten up but it was just hills all day. Hill hill, hill. I started to dry some stuff out on the bike and just kept on peddling and then ended up going along this damned river (Ivajlovgrad) and some beautiful decents too I came down from one climb, I had another to go up and I was just knackered. I'd been cycling for eight hours with only a few minutes break and I think that I slept as I peddaled up this hill because when I got to the top of this hill I felt completely refreshed as if I had had a good kip. Down the other side that basically took me to the Greek border. So I'm in Greece at the moment and its raining and the field is muddy and my shoes are caked, Mrs F's tyres are caked and the decision is whether to take a short cut or not and not travel into Greece and if its raining in the morning I just don't see the point. I did ninety miles today, I'm absolutely fucked, its raining, I don't know see how I feel in the morning. Click