19:15 on the flight to Kirkenes, Norway. Scandinavia is beautiful and white beneath me. A triband of red coloured horizon has followed us from Oslo, but now as time passes, it becomes dark. It looks so vast, dark and cold. Town lights are so few and far between, it’s going to be hard and I am truly scared.

The plane landed on a snow covered runway where the runway lights glowed through the layer. We disembarked using exposed portable steps into a heavy snow shower and made our way to the terminal building. A small modern one with two luggage belts.

My bike was the first item to come through on the carousel and it was covered in a dusting of snow. I moved it to the side, waited for my other bags and then set to work, removing the plastic cover from the bike.

I straitened the handle bars and then went to the bag that I had put the pedals in. They weren’t there. The bag had been opened. I pulled everything out, felt in the internal pocket and then began to check each bag randomly and systematically over and over. I was well practiced in this type of search as my mum was always losing her car keys when we were kids. It’s just that my pedals weren’t somewhere in the house. They could have been anywhere between London and Kirkenes.

My spiked tyres slipped on the marble floor as I tried to load the panniers. I took everything to the exit and set my bike up outside. It was snowing so heavily that my bags were completely covered by the time I was ready to mount. The hotel which I thought was half a mile away was in-fact 8 miles away. The airport was a long way from the town.

night. I was ready for it. It was hard work cycling through the snow. The resistance of the thick snow, the slow up hill speeds with the fully laden panniers and the slow downhill speeds made the whole journey last an hour and twenty minutes.

Thankfully there was a key on the counter at the hotel on a sheet of paper with my name on. I had a bed for the night.

I was wet through with sweat but my body was cold. This is my main fear for tomorrow. What will it be like after a day of riding? It’s going to be impossible not to sweat. My clothes will be wet through from the day before. Is this really such a good idea? 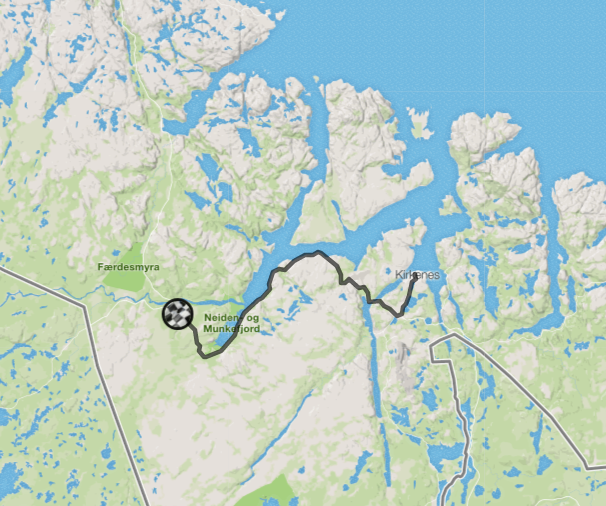 The receptionist says little - he says that I’ve paid and asks for the key. I’m off.

The snow is deep and I think I am following the sat nav for the museum. The main reason for the trip is to learn some more about the iron curtain but after five miles in I realise that the sat nav is taking me to a different destination. Neiden.

The going is so tough that I decide not to turn around and I carry on to Neiden back along the road I travelled last night and after an hour I still haven’t reached the airport.

The roads are quiet and any passing traffic gives a wide berth. The Scandinavian culture is very courteous towards cyclists.

As I gain speed down a hill towards the airport there is a massive thwack. And splinters of car parts hit me and the bike. I pull the bike slowly to a stop as hard braking would cause me to skid. I’m still not used to cycling on the snow, even though my tyres have studs and spikes.

In front of me, a car and a taxi bus pull to the side of the road. They had collided as they overtook me. How this happened I have no idea, I can only imagine the taxi was following too closely as the car in front slowed to overtake me. It’s internationally recognised that taxi drivers are immortal and gained their licences from a couple of sessions on Grand Turismo.

By the time I get to the pulled over cars, my legs are like jelly. The driver of the car who was rear ended came back to check on me and when I asked if he wanted my details he said no problem, we’re all sorted.

With that they both drove off. It seemed too easy. Did they know each other? I’m sure they had no time to go through the rigmarole of exchanging details.

A mile or so down the road the taxi had turned around and I saw the full scale of the damage - at least £2K if they was no engine damage. The taxi driver was not happy and he said a couple of loud things at me as I passed by. His passengers sat inside waiting for an alternative, safer ride.

Snow showers came and went and once past the airport, the traffic was quieter. The road took me to the coast and I saw the Barent Sea for the first time, unfrozen it’s contrast in the winter sun against the snowy backdrop was a steel grey, timid ducks flew away from their icy cove as I approach.

Before Neiden I stopped for the night. I chose my spot based on time. It was 1600 and this would give me just over an hour to get ready. 26 miles travelled today. Slow in the snow.

I have a light weight shovel and I began to shovel away at the snow to create a space to lay down a ground sheet. It’s a couple of metres deep and I curse for picking a larger tent for the trip. I create a flat base and stomp it tight with my feet and set up the tent. Perfect.

I couldn’t get my stove to work properly and it’s orange flame gave of an acrid smoke as it took a long time to melt some snow for some hot water to drink and boil up some rice.

Before dark I was in my tent quite happy to be where I was in a vapour barrier layer in my sleeping bag watching ice crystals form on the ceiling as my warm breath left me. 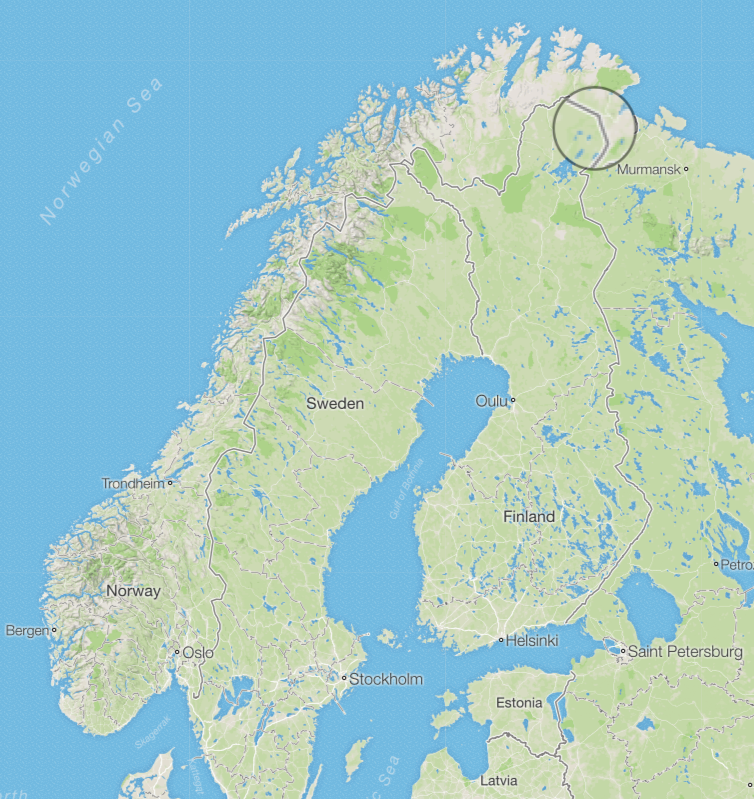 It took two hours to pack up. The main hindrance was the burner and the snow and the puncture. I’m not too sure what caused the puncture but it was unfortunate to have one early into the ride. I checked and checked for the cause but couldn’t find one. Fingers crossed it wouldn’t happen again.

It was nearly midday when I set off and only the time zone change would give me the lost time back as I headed down a long straight road into Finland.

I passed a customs toll house and pulled over just to avoid the embarrassment of being chased down the road, but a uniformed man sat at what looked like a staff canteen table waved me on as he continued to chat with his colleague.

There was an immediate change in topography, it was less hilly and pine forests opened up before me. The small area of land between the Barent Sea and where I was now once belonged to Finland, but post Winter War negotiations removed access giving it to the Soviet Union and then Norway. And now Finland doesn’t have a coastline with the Barent Sea despite the area being known as Finnmark.

The border crossing was unceremoniously met with a selfie and I popped into the K Mart at Naatamo. A coach had just dropped of some Chinese tourists who had set about taking photos of their soft drinks artfully arranged in a small mound of snow. The Finnish for unbelievable is ‘Perkele’.

I filled up my fuel bottle and bought some snacks and headed off.

I headed off into an endless white road with no traffic for hours at a time and with the tourist bus ahead of me, there was nothing.Whenever I stopped, there was no noise.

This whole area that I am cycling through is inhabited by the Sámis people. They also inhabit parts of Norway and Sweden and so have given two fingers to international borders. This is Lapland! But to call a Sámis a Lappi is derogatory.

That afternoon, I stopped at the side of the road by a frozen snow covered lake. The type you see in Dr Zhivago. Two wooden rowing boats with a foot of snow on them sat moored to what must have been the shore as there was no other clear definition of where the lake of snow began.

I began my ritual and once fed, watered I built a small fire where I sat a while. And I mean about ten minutes because I’m lazy when it comes to gathering wood from trees that are surrounded by four foot of snow.

In my tent it started to snow outside. Little pings hit the canvas and I drifted off to their rhythm.