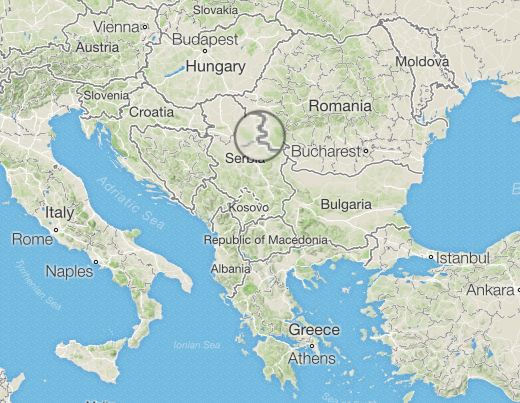 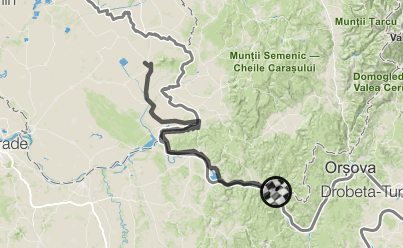 Dogs coming up to the tent, barking. Its half past four. The norm in Serbia, like a chocolate on your pillow in a hotel, the early morning “What are you doing here?” is complimentary and now received with the same indifference.

It’s cool, there is no sign of the man who gave me permission to camp and I am convinced that he had nothing to do with the plot of land I spent the night on.

Making miles is the name of the game for the next few days and the luxury of stopping at museums open or otherwise is pure fantasy. It’s a shame because although it’s grey Vrsacs would be worth more that a flyby visit. But that’s all I give it. A supermarket pitstop and I join a series of straight roads through Bela Crkva to the border.

The Eurovelo13 signs encourages me, as I have come to expect, to stay in Serbia. It tries to direct me to a ferry service at Ban Palanka, but I am now wise to the shenanigans of rogue Tourism Ministers to get me to part with my hard earned. I stick with the guide and make for Romania.

As I head to the border I have a great anticipation for Romania. When I was a kid we had a VHS tape which had two cartoons recorded on it. One was ‘Bats in the Belfry’ where three bats stooged out an act and another which was a bonanza of colour following the flow of the Danube to Strauss’ Blue Danube. It was ingrained into my childhood psyche and being here and seeing the river in it’s full glory would be a somewhat delayed coming of age moment.

The relaxed Romanian border guard said ‘Go’ in a cheery way and I set off into a vastly different countryside to that of the plain food basin of Serbia.

5,000 miles and the Romanian Border

I followed a road that hugged a tributary taking me through its lush valley under the watchful eye of rugged hillsides. I gorged on plums until my belly was full and would ride some distance and see more fruit for picking. A breeze fanned branches of trees similar to palms giving the countryside a tropical air.

The first village I passed had a Latin feel, midday heat, sandy streets, lazy dogs lay in the shade. And someone had kindly died bringing an undertaker, wailing women and rag dressed children into the street. I was very embarrassed to be a tourist to this very private scene and could only nod passing condolences to the man whose responsibility it was to manage the chaos.

When the children screamed with delight as I passed, their innocent inappropriate waving and chasing, left me no choice but to awkwardly play along, each pedal turn taking me away the village's grief.

A day of mourning

My first site of the Danube did not disappoint. When I crossed it in Bratislava it had been a city river where the bridges and city buildings hid its beauty. But here at Bazias it was wide and stunningly beautiful next to the ribbon of road that clung to its course.

I followed this road for easy mile after easy mile, with little traffic I felt the river's cool breeze on my face as I climbed and descended and wound a path that changed with the hills as I passed. On the other side of the river I saw bridges, tunnels and trucks. This was on the Serbian side and would have been the road that I would have been on had I followed the sign at Bela Crkva.

When the heat was too much I stopped at a restaurant and waited for an afternoon storm to pass as I wrote up my diary and looked at the route ahead.

Romania was the only country to use force to overthrow its Socialist masters. Unlike the Baltic’s Signing Revolution, or Poland’s Solidarity movement Ceausescu and his missus were overthrown and executed as part of a violent public uprising.

Shells of buildings and factories show a history of lost industries and waste management is like Serbia a low agenda item.

Two boys cycle with me, their holidays have begun an I am a source of amusement. To begin with and then after a couple of miles they delight in telling me about their town and the big face in the cliff which to one of the lads is a long way off and very mystical.

Camping spots are many along the river and fishermen sit on the bank with tents, beers and bbq. They appear to be oblivious to the piles of litter around them at these stations.

The childhood cartoon didn’t prepare me for the debris that seemed to line every metre of shoreline and as I came to pick a spot for the night I eventually resigned to sharing my beauty spot with rubbish.

As I pitched up the Border Police came and asked the questions. They were polite and they made notes in an exercise book, the contrast with the Finnish on board computer and scanner or the Lithuanian radio through. I wondered if anything would be done with their notes.

I asked if it was ok to camp. He looked around at the patch of river bank, maybe at the rubbish, then at me and said “You can camp here.” Not affirming, but thinking that there were more viable alternatives.

Cumulus nimbus clouds threatened storms, pink in the setting sun. Their reflection gave a peace to the evening scene and there were some distant rumbles but that was all. A gentle frog chorus sent me to sleep. 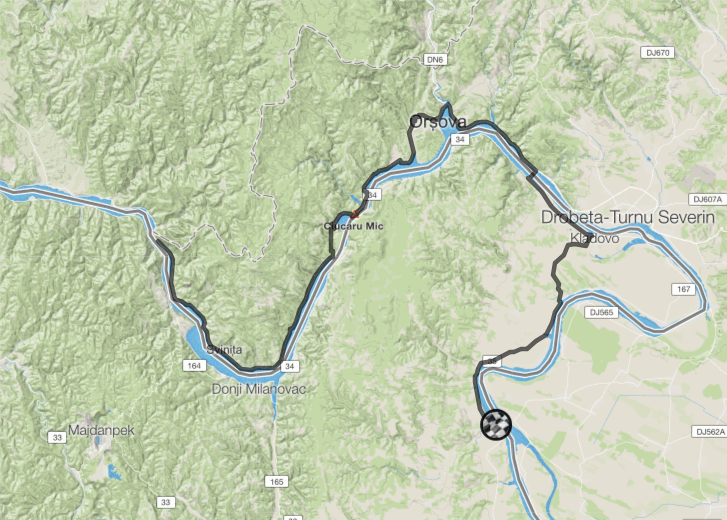 By 3am the gentle frog chorus had turned into an AC/DC rock fest. Thousands of them vying for some company to make tadpoles.

I did manage to get on the road though by 7 and although short of sleep and without any water for porridge or drinking I headed off along the river.

The temperature was soon in the thirties and the hill climbs increased as did my thirst. Signs at the side of the road threatened rock falls and sure enough rocks fell. The road had boulders the size of footballs on it and I was glad to be wearing my toughened plastic helmet bought in Estonia.

As I began to be concerned about going any distance without any water two gents were filling water bottles at the roadside. What luck, trickles of spring water came through pipes with religious plaques above them and after filling my bottles and taking some of the water I felt protected from any chance encounter with falling rocks.

A little later I gave thanks to the big face in the rock. The Dacian King Decebalus of whom the young cyclist has spoken the previous afternoon. Carved out just thirteen years ago Decebalus had already undergone reconstructive surgery, it didn’t look like he would be around long enough to warrant buying a miniature from one of the nearby vendors.

Who you looking at fool

By one the heat and the climbs inland away and back to the Danube had taken their toll. I had done 40 miles, climbed over six hundred metres and was exhausted. I stopped in the shade of a supermarket awning and rested, envious of a stray dog laying on the tarmac under a rusty BMW in the shade. The dog must have known that this was the only car in the car park that didn’t come and go. Smart.

A touring cyclist pulled up and we chatted. He’s from Columbia and as we chat his character is elaborate and confident. He loves the safety of Europe and how the people of Romania have a passion. He talks of how in Mexico he had to hide behind a van’s engine when he was caught up in a drug shoot out. His Slovakian wife left him in Georgia after work ran out and he was cycling back mostly by train to Bratislava. He can't understand my route to the Black Sea. Its the first real clue that the journey ahead maybe tough. "Señor, you can go the flat route to the north of Bulgaria and follow the coast along the beautiful beaches. Or the long mountainous way....."

I left the town by a main road where the hard shoulder was sufficient until a bridge where a curb would put me into the main road. There were a dozen or so of these tributary bridges each one's sole goal was to throw me into the path of a truck. I noticed a pattern to passing traffic and every three minutes there would be a lull and I would take these windows to push through tunnels and over bridges. Playing the arcade game Frogger as a kid did have its benefits, finally.

Through border controls I crossed into Serbia over a long dam. The Iron Gate. The heat was still intense and I spent some time in an air conditioned garage before following the well signposted route along the Danube before setting up for the night at another fishing station.

Another frog civilisation welcomes King Frog and in celebration of my arrival they begin an all nighter full of irreverence and debauchery.