A valley view of Trgoviski Timok river near Kalna 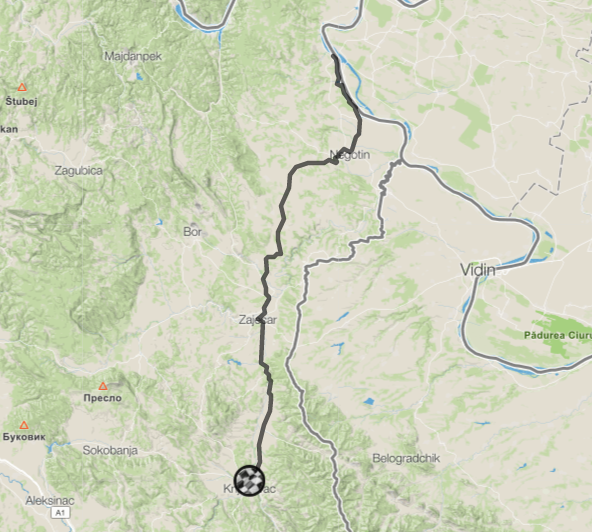 The morning sun rose over the river and shone directly through the vent by my head.

I had slept well and was cooking porridge and off into the cool morning air by seven.

The heat soon came and I pushed through a long a climb into the mountains that was quite beautiful. It wasn’t the alternative route suggested by the guide, it made the next town more directly and on smoother road. When I arrived at Zajecar I had completed 50 miles and it was only mid afternoon, the smoother roads had really sped things up.

This area of Serbia is very beautiful in contrast to that on the Croatian and Romanian Border. The mountains and foothills create a Mediterranean feel and at points I was expecting to see the sea. The city of Zajecar also had a relaxed vibe and I sat at a cafe by the plaza.

I had an ice cream and filled my bottles at the city’s water fountain. (A lot of people were doing it). As I set off though I didn’t feel too good and a few miles up the road I had to stop. I stopped by a melon vendor and bought a melon and began to unsheathe my knife. The vendor said something but I didn’t listen and went to cut the honey dew.

Again he stopped me and then went off into his house.

When he returned I had already devoured half of the melon with slices of clean peel left on the wooden stump I had used to cut up the fruit. He watched me eat the rest. It was juicy and so tasty, I slurped and made noises such as ‘mmmm’ as I ate without looking up swallowing the flesh and seeds in large mouthfuls. Finished he showed me that he gone to fetch me a ‘cold one’. I had that too.

Back on the bike I realised how bad I had been, the mountain climbs, the temperature in the high thirties, limited water and singing frogs had all taken their toll. I took it a bit easy to the next town and took rest in a cheap hotel for the price of 15 warm melons. 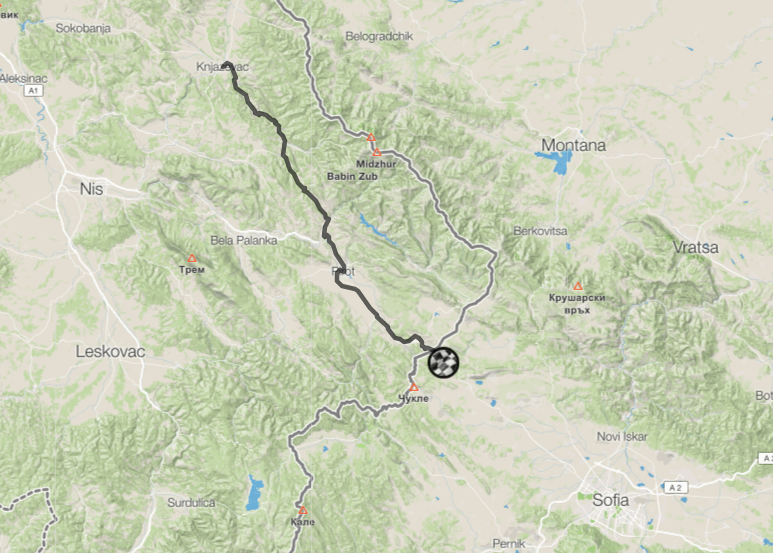 I left the hotel with a good breakfast inside me and a good nights sleep behind me. I followed a wonderful valley road that brought traffic free roads and villages where old couples tended their hay fields with scythes, wooden forks and horse drawn carts. I climbed high and dodged thunderstorms. The higher ground was a little cooler, the valley walls lush, green forests and silver waterfalls.

By the afternoon I had reached a large town, Pirot where I ate in a cheap, fast food joint, waited out the storm and set off for the Bulgarian border.

I followed my guide and found myself on a smooth tarmac dual carriage way with a hard shoulder. Most of the time it was just the two of us, the occasional German made car and a few lorries. Mrs F and I stayed ahead of the storm clouds that clung to the mountains and for fifteen miles we paced along the thick blacktop parallel to a railway line and a busier single lane A road. My guess was it was the road we should have been on, the empty road being built after the guide had been published. I couldn’t rejoin the E13 and carried onto the border.

The toll booth loomed, new, well organised, maybe a foreign operator, with lanes for all vehicle types, except bicycles. I approached a staff hut and a young girl, long black hair with a hi vis waistcoat came outside. She didn’t know what to do, I shouldn’t have been there, I was a problem. I said, “Its OK.”

I headed on, but it wasn’t ok. The turn off for the town was closed, it was still being built and the gentle climb, on the road I shouldn’t have been on either legally or by Eurovelo 13 directive, lead to a cyclists nightmare. A tunnel with no hard-shoulder.

I attached the rear light. A high intensity LED flashing red, the best. I Bumble, but I'm not stupid. I entered the tunnel, there were no cycling prohibited signs like at Heathrow terminal two, but it was a definite no no, maybe I was stupid. Cars sounded deafening, like eighteen wheelers and trucks sounded like the driver had me in their crosshair. The curve of the tunnel wall felt close enough to cause me to tilt my head to the left and the heightened state of alertness focused my complete attention on the white dot at the tunnel exit. My one goal like a tightrope walker looking at the end of the line.

As dusk came I left the E80 toll and stopped at a service station for dinner and to rest my legs, I was a few hundred metres from the border and I had to decide whether to camp in Serbia or Bulgaria. I opted for the latter.

The border, the Serbian side had packs of stray dogs patrolling the six entry lanes, they bid me a cold good-bye and for the first time I thought that I would get an unofficial stamp in an exposed calf as the pack had a ferocity I hadn’t yet encountered. My now well practised hiss and stone throwing action worked, they cowered and went back to patrolling the verges for scraps. 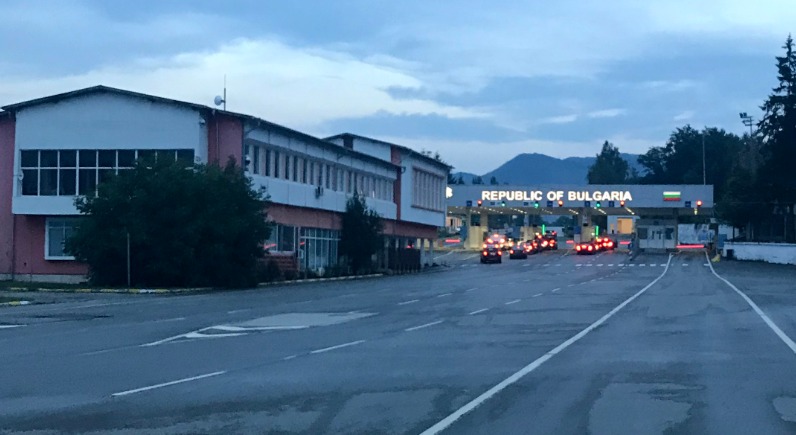 By the time I had been processed by both sets of customs it was dark. The immediate Bulgarian border post area had a vibrancy and a confusion. Huts with flashing LED lights, hundreds of trucks with idling engines, a melee of people in transit, hawkers, windscreen washers, hitchers and a sign for Istanbul 615 kms. This was a gateway to a foreign world, different from Russia. A gateway to the Middle East.